With the HP Printer Smart Tank 315, Wireless 450, Wireless 455, Wireless 457, Plus 550, Plus 555, Plus 559, Plus 570, Plus 655 Printers, HP is also launching for the first time office-grade desktop printers that feature side ink tanks for easy ink refill. These printers are very easy to refill. A small refill guide shall give you security.

On the side of the printer there are four ink tanks with different volumes. The black ink tank holds 100 ml and the three coloured tanks each contain 70 ml. It does not matter how full you fill these ink tanks. A very small amount of ink is enough to continue printing. It is important that you do not use any universal ink for this purpose. We recommend our inks from our affiliated ink manufacturer Octopus Fluids, which have been specially developed for the print heads used in HP Smart Tank printers.

An interesting insight into the development of these inks is given by the following text after the pictures about the product release by our chemist Mrs. Balzer.

The chemist presents his development steps in short words and informs about special features of the original ink and the new development. You can read the product release of our chemist Mrs Balzer here:

the inks for the HP Smart Tank series are ready. The printer uses an ink tank system with the 4 standard colours CMY dye-based and BKP pigment-based.

Development and ink:
Developed on the HP Smart Tank Wireless 455, the natural colour and print image of the original ink was preserved during development. The black and white print is again more sepia with original ink. With the developed ink, the black and white print is cooler, or in fact really black and white. We have decided not to reproduce the sepia colour tone of the original ink, after all black should also be black. Especially in picture printing, the other colour tones are thus enhanced by better contrast in the black area. The picture looks more expressive.

It was noticeable during development that the printer, depending on the quality and amount of ink per printout, takes a short break after 8-14 pages. This is apparently because it sucks ink from its tank and then continues printing. On the next page printed, the printer sprays much more ink out, resulting in a blurred image in the text. But this only happens with black ink. So especially with 100 pages of text, there is always one that is of unattractive quality. Of course, I tested whether it behaved similarly with the original ink and it was actually exactly the same. So it is unfortunately an unsightly quirk of the printer and is not related to the ink used.

The ink of the printer was developed with DMSO and not with 2-pyrrolidone, so that no problems concerning an additional CLP marking are to be expected.

In order to check the long-term compatibility of the ink, a continuous printing test was carried out over 500 pages of colour in one go.
Also the durability test with a break of more than 2 weeks now ran without any problems. There were problems with black before. The formulation was revised again and now runs without problems, even after 2 weeks.

Cartridges/ Refill:
The printer has ink tanks attached/integrated in the device. HP has set up a refill system where the bottle is placed on the opening of the ink tank and the contents flow into it.
I have always filled the printer with a syringe.

Compatible devices:
These models can be filled with the ink. Possibly others will be added later. 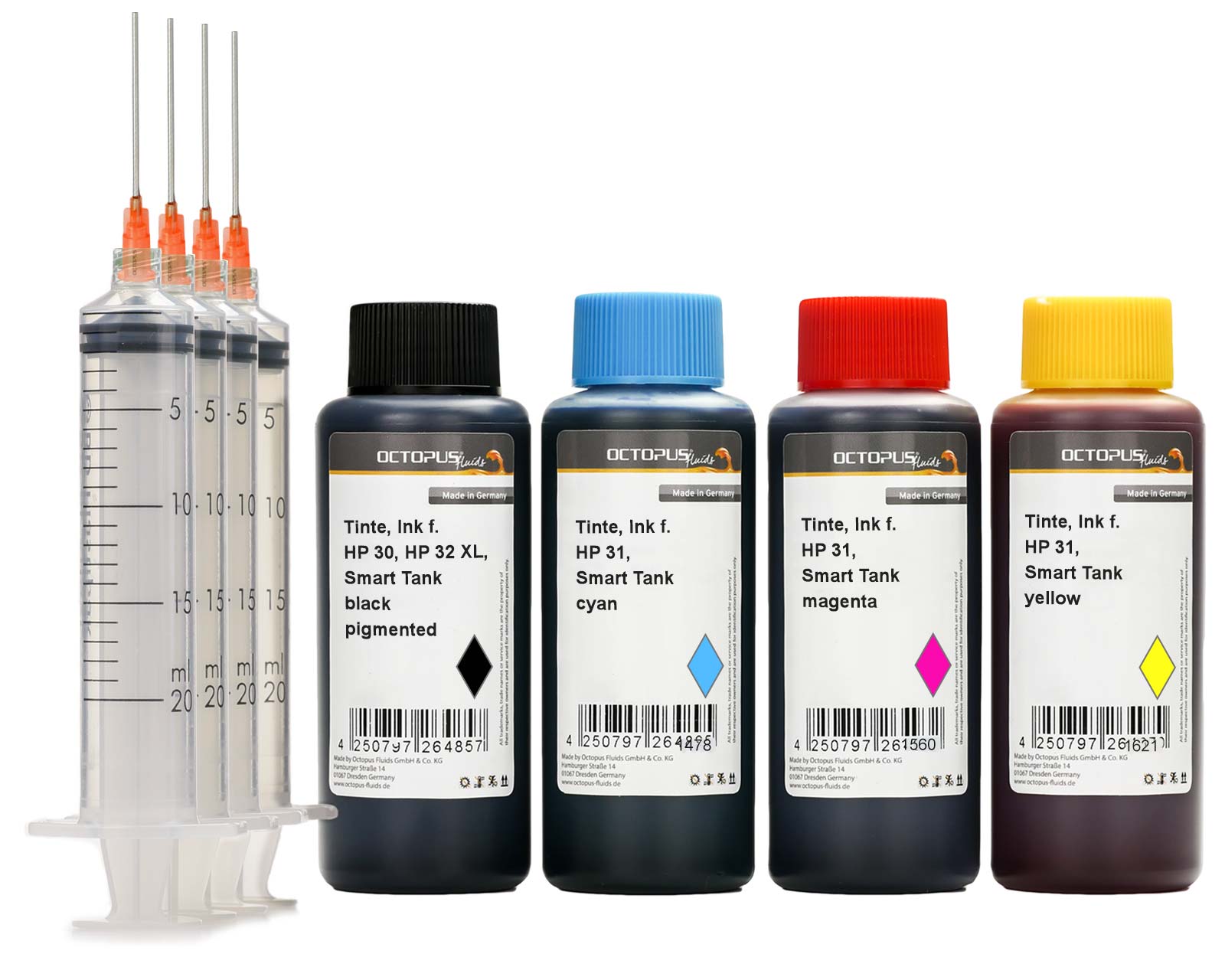